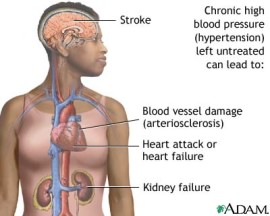 Hypertension commonly does not produce clinical outcomes until vascular changes in the heart, brain, or kidneys happen. Greatly increased blood pressure harms the intima of small vessels, ending in fibrin build up in the vessels, development of local edema and, in some cases, intravascular clotting.

Signs and symptoms produced by means of this procedure depend on the location of the damaged vessels:

An elevation of the systolic and/or diastolic blood pressure raises the chance of developing heart disease, kidney disease, atherosclerosis or arteriosclerosis, eye damage, and brain damage. These complications of hypertension are typically referred to as end-organ damage simply because damage to the organs is the end result of chronic hypertension. For that reason, the diagnosis of hypertension is important so efforts can be created to normalize blood pressure and prevent complications.

The myocardium undergoes structural changes in response to elevated after load. Cardiac myocytes respond by hypertrophy, allowing the heart to pump a lot more powerfully against the increased pressure. However, the contractile function of the left ventricle remains normal until later stages. Eventually, LVH lessens the chamber lumen, limiting diastolic filling and stroke volume. The left ventricular diastolic function is markedly compromised in long-standing hypertension.

Nephrosclerosis is one of the possible problems of long-standing hypertension. The risk of hypertension-induced end-stage kidney disease is greater in black individuals, even when the blood pressure is under great control. Moreover, individuals with diabetic nephropathy who suffer from hypertension are likewise at higher risk for developing end-stage kidney disease. The renin-angiotensin system activity affects the acceleration of kidney disease. Angiotensin II acts at both the afferent and the efferent arterioles, but a lot more so on the efferent arteriole, which leads to an increase of the intraglomerular pressure. The excess glomerular pressure leads to microalbuminuria. Decreasing intraglomerular pressure utilizing an ACE inhibitor has been shown to be beneficial in individuals with diabetic nephropathy, even in those who are not hypertensive. The beneficial effect of ACE inhibitors on the progression of renal insufficiency in patients who are non-diabetic is less clear. 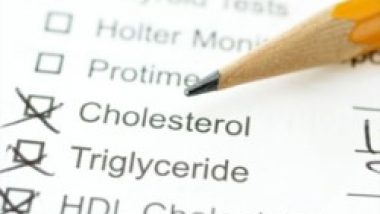 What Are The Effects Of Too Much Cholesterol? 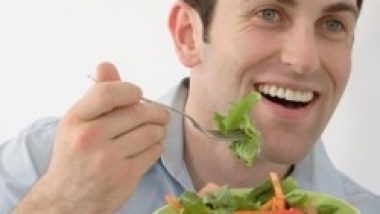